Houseplants, Routines, and Learning to Tend to My ADHD Brain 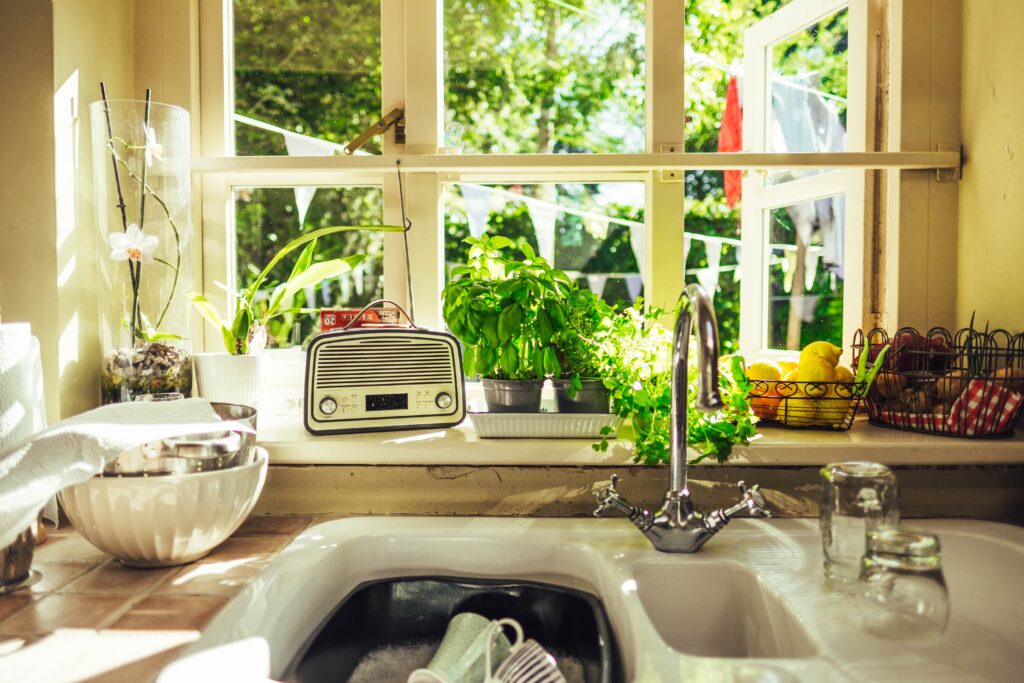 Cards on the table? I hate routines—well, hated them. I’ve rebelled against them my entire life.

“Inconsistent” was the most common criticism I received in school, at work, in everything. I rationalized that routines were something other people needed. I was “too creative” for routines! I didn’t want to be controlled! I was fine getting through life consistently inconsistent. Household chores, self-care, work responsibilities, social obligations swarmed around in my head, and I managed them “catch as catch can,” not unlike a cat chasing a moth… or 40 moths. I’d oscillate between tasks based on which ones were right in front of me and those that had become emergencies from neglect. A lot fell through the cracks. I was constantly anxious, overwhelmed, and felt like a failure. I was sure I just had to try harder; a common feeling for people with ADHD. Routines didn’t occur to me as an option. I’d failed to keep them for my entire life, and I didn’t have the emotional bandwidth to keep trying and failing.

Then I was diagnosed with ADHD in my mid-thirties. I started working with a therapist who specializes in Adult ADHD. Shockingly, when it came to routines, I realized I was wrong about everything. Now, routines are how I support myself, minimize my anxiety, and create more freedom to do the things I want. But to make that monumental change, I had to learn to think about routines differently. I used to think of routines as rigid, even oppressive, I tried to perform them by rote, and failed miserably. But my diagnosis changed that. Routines aren’t an obligation or a test to fail—in fact, they’re more like gardening tools and houseplants. Routines prune the stress and anxiety from my day-to-day life, and create an environment I can thrive in.

I want to acknowledge that houseplants can be intimidating and overwhelming too! Even if you’ve killed a hundred orchids, this post is for you. And by the way, don’t start with orchids. Put the orchid, and those unfair expectations of yourself, down. People who keep orchids alive are magicians, pure and simple.

Being queer and having ADHD means frequent obstacles; things that are “normal” for other people just don’t work for us. One study showed that children with ADHD receive over 20,000 additional negative messages by age 10! Being queer means even more negative messages. This is to say: be gentle with yourself. It’s ok if routines haven’t worked. It’s ok if you have negative feelings about them. I’m not writing this to gaslight you with a neurotypical ableist “just get organized” platitude. We’re talking about a whole different approach to routines; we’re talking about self-designed accommodation and accessibility. There are scissors specifically for left-handed people. When left-handed folks use “typical” scissors, it’s uncomfortable and they don’t work. Routines for people with ADHD are similar.

Start with a big cup of self-compassion. Everyone’s houseplants die sometimes. The natural end of life is death. Plants die in nature too; it’s not a failure. Plants are all about adapting to their environments, and that means mistakes and good feedback are necessary. Routines are also, in some ways, doomed to fail, and that’s ok, it’s not your fault. What I used to see as “failure” of a routine, I now use as information to adjust the routine and make it fit better. It’s going to take some time, and some trial and error to figure out how a routine works best.

Did I forget to water my begonia and now it’s falling over like a drag queen’s death drop? It’s fine! She’s trying to get my attention! A little refreshment and we’re good. If I’m overwhelmed and frozen, my body is trying to get my attention that I missed some self-care routine. Did I forget to exercise this week? Or use my planner? Not a problem, I get back on my routine, because the show must go on. I use routines to care for and anticipate my needs before things get dramatic. Years of gardening and farming have taught me that mistakes are feedback, they aren’t failures; and that has completely changed my ability to use routines.

“Should” is an invasive species.

Do you feel like you “should” keep a planner, balance your budget, or keep a clean house? Having ADHD means being motivated by genuine interest, not by importance. Sure, routines help me do important things. But I have to intentionally focus on why those things are important to me. “Should” is a weed stealing your energy. Rip “I should do the dishes” out by the roots. How does a sink full of dirty dishes make you feel? How do you want to feel about your kitchen? Do you want to do them in the morning so you can rest or play at night? Do you want to do them at night so you aren’t overwhelmed in the morning? Routines can be an opportunity, a game, or gift from your past self to your future self.

What would make your routines interesting, rewarding, or playful?

I hate that I “should” sweep the floor. It makes me dig my heels in against doing it. But if it’s late when everyone’s asleep and I play music, or practice singing in range, suddenly I “get to” sweep. I remember how it feels to walk barefoot on a clean floor, and how it feels like a gift to myself, and I look forward to sweeping. When I feel like I “should,” I won’t; thanks ADHD! But if I focus on why I want to sweep and how I can make sweeping fun, everything changes. Grab some craft supplies, or a new hobby, and make a trellis for a routine.

Not every routine, or plant, is right for everyone.

Routines are supposed to make life easier. The idea that routines create joy or relief was shocking. But if a routine is burdensome, it’s not a good fit. It takes time to figure out and tweak a routine until it’s right. Once tuned up, it’s infinitely easier to stick with. Bonsai your routines to your life, not the other way around.

Start small and simple. Exercise of any kind helps manage ADHD. But making a routine to go to the gym every day is probably just as doomed as impulse-buying a dozen ferns and assuming they’ll look great, like on Instagram. Learn to crawl before you take up pole dancing. Be curious, see if you can regularly do any kind of exercise at the same time once a week. Use how that makes you feel as feedback to evaluate what kind of exercise routine you want to build.

Start with reality, then add context.

What routines do you want to adopt? Figuring out what routines you want can be hard, because of how many unconscious routines we already have. I habitually tossed my keys anywhere. Which meant I anxiously and chaotically shuffled dozens of memories of places I’d left them. But! This is where context comes into play. When do I have my keys? When I come home and unlock the door. “Context” means that because I use them to open the door when I get home, that’s when I have an opportunity to create a routine that makes my life easier. If I make that routine fun, by shooting a hoop with my keys into a basket by the door, I’m more likely to do it. Before I could make that routine, I had to realize I already had a routine: leaving my keys anywhere, thinking I’d remember, and later panicking to find them, scolding myself that I should leave them in the same place.

Purpose: Don’t start a routine based on what the neurotypical world thinks your routines should be. What are your needs? Start with something you already deal with, maybe something annoying so the routine feels comparably better. Imagine how a new routine would make you feel. What if you lost your keys 60% less often, and could trust where they’d be when you need them? How would that make you feel?

Environment: Ferns aren’t fans of sunshine, but succulents love it. Many of us with ADHD are used to masking or trying to “act normal,” which isn’t our real “normal.” Dealing with the challenges of ADHD gets easier when we shape our environment to support our needs, rather than trying to change our needs to fit our environment. Put a routine somewhere visible, where it has to be interacted with. Set a friendly alarm. Your attention is the sunshine your budding routine needs.

Care: The grass isn’t greener on the other side—it’s greener where you water it. Sometimes our routines fail because we get bored with them; the same regularity that is supportive makes routines invisible to our dopamine-seeking minds. You’ll probably need to transplant your routines or refresh them from time to time so you notice them again. How often does this routine want attention? To go back to our trusty analogy, plants need different amounts of care. Some want to be watered every other day, some once a week, and succulents only want you to whisper the word “water” in their ear every full moon or they’ll drown from being smothered. Routines are the same!

Consider pairing your self-care routines and your houseplant routines. Put your keys on a hook and give a spritz of mist to a Boston fern every day. Get some exercise and water your ivy once or twice a week (make it easy and set alarms for specific days).

Part of why I struggled for so long to use routines was because I was trying to use them as though I was neurotypical. The experience of having ADHD can be both isolating and gaslighting. I never understood why using the same steps that worked effortlessly for other people was counterproductive for me. The routines others found supportive and healthy, I found restrictive and toxic. I wasn’t treating myself like the specific type of houseplant I am. I was trying to feed myself the wrong nutrients. I had to re-engineer routines, as though I was an unknown plant I’d found and had to puzzle out its needs. Once I did that, with the help of my therapist and my ADHD community, I began to thrive and grow.

Dylan Marie Alter (they/she/he) is a nonbinary attorney, teacher, and consultant of Jewish and Choctaw descent; they also have ADHD. They currently host events for Queer ADHD and are studying to become an ADHD Coach. A lifelong learner, their education ranges from philosophy and psychology at the Hutchins School of Liberal Studies to International Human Rights, Sexuality Law, & Critical Race Theory at American University’s Washington College of Law in D.C. They facilitate and teach restorative justice practices as a nontoxic, harm-reduction strategy for community conflict. For more than two decades, they’ve led queer theory and diversity discussion groups. They are particularly interested in unearthing how laws and society, rather than nature, have narrowly defined many of our identities and exploring how intersectionality can untangle those confusions. Their influences include Audre Lorde, Bell Hooks, Sandy Stone, James Baldwin, Paulo Freire, Ram Das, and Lou Andreas-Salomé.