A Dozen Years Bald: How My Appearance Affects My Relationship to the World 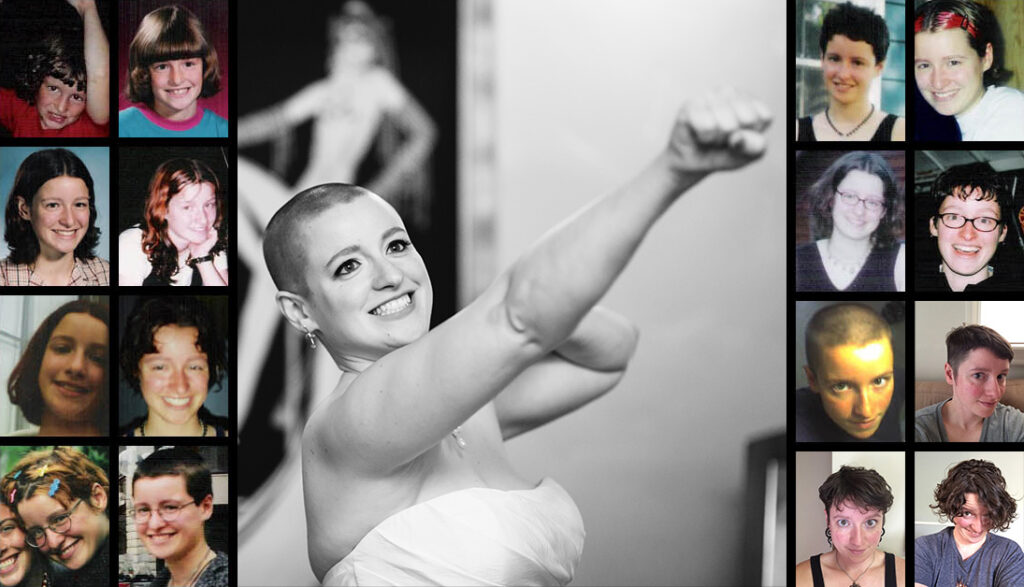 After years of struggle, my appearance finally felt like me when I shaved my head in my early twenties. It was a turning point for me. Prior to that, I had been struggling with my hair, along with my identities, my body, and my awkward presence. Once I shaved my head as an adult, it all came together. My hair became my defining first impression, coloring my relationship with everyone I encountered. I saw myself differently from that point forward.

You can’t see it now, but I have wavy brown hair, and I didn’t take care of it well. I didn’t learn how to encourage its curl, and i didn’t learn how to straighten it, so I just let it be haphazard, unruly, and sometimes frizzy. In high school, I tried to take control of it by turning myself into a redhead—but bright red. Fire engine red. I also went wild with barrettes and accessories, and had the whole hippie eclectic vibe going on. There was one very exciting week in high school when I shaved it, but then it grew back so quickly—my awkwardness returning in lock step with it.

In my early twenties, I settled on a short pixie cut in my natural hair color because it was easy enough to manage and vaguely queer. I also rejected the concept of “personal style” by dressing as plainly as I could manage. I rationalized that fashion was a superficial waste of time, but really, I just couldn’t find myself anywhere in it. I also struggled with depression during this time, and it looked a lot like trying to become invisible.

When I shaved my head for the first time as an adult, it was an accident. I was giving myself a haircut—which was normal for me because I was broke and felt like I could handle it, but let’s be honest, it never really came out the way I wanted—and this time I really screwed it up. I was angry and not paying attention and I cut a big, obvious streak way too close to the scalp above my right ear. Shaving my whole head was the only idea I had to even it out. I was in college at the time, and about to go into winter break. I had no obligations and no one to impress for at least a month, so the risk felt somewhat low. When I shaved it off, it was a thrill. I felt bright, powerful, and rebellious, but I also didn’t recognize myself in the mirror.

The next morning, I rode the city bus and felt extremely self-conscious. I figured everyone was staring at me—who was this white girl with a shaved head who was such a rebel, what did she have to prove anyway? But when I found the courage to look at the other passengers’ eyes, there was no judgement. No one was even looking at me. I was just a normal person to them. I was in San Francisco, of course, so that helped. But it was clearly—seriously—no big deal. I tried seeing myself through their eyes, the eyes of the strangers, and realized I’ve seen many people through those eyes and didn’t think twice about it. We’re proud of our differences here, and we’re expressive. I started to see myself as someone who could pull this off, and I really enjoyed how light and free I felt.

One interesting feature of a shaved head is that there’s nothing to hide your face behind. I have big expressive eyes, and I learned that I like to amplify them with makeup. Earrings also started to feel more right to me. I learned that my inner compass for style and gender presentation is firmly androgynous, and that when I had hair, I was uncomfortable with how feminine I presented. So I had been downplaying it with the plainest t-shirts, loosest jeans, and most nondescript jewelry I could find. But with my shaved head—a haircut that means I am addressed as “sir” by anyone standing behind me—suddenly makeup and earrings belonged on me for striking the right balance. I became more expressive with my fashion. I became more joyful in presenting myself to the world.

Connecting with my San Francisco queer community immediately became easier. I was now more visibly queer, and believed that I visibly belonged. I felt more confident, more able to walk into a room of strangers and assert with my presence that I was supposed to be there. I felt like I could flirt more easily, connect more easily, and show up more completely as myself.

At the time, I was a freelancer working in marketing and branding agencies. For some magical (and probably patriarchal) reason, having a shaved head improved how people treated me. They seemed to believe that I was more creative, more cutting-edge, and more of a badass—all things that translate to “competent” in that world. It was also memorable. People knew me, noticed me, and referred to me by shaved head. Every few years, I would try to grow it out for a more “professional” haircut, and invariably, people who knew me stopped recognizing me in public. I realized that was pretty bad for my referral-based business, so those experiments never lasted long. And when I buzzed it back off, I always felt relief.

When I got my first job at a large corporation, the response was different—I was met with suspicion instead of trust. After a mix of subtle double takes and not-so-subtle questions, I picked up on the fact that I was expected to have a “more corporate” presentation. So I reluctantly grew my hair out, and it changed that response. I felt more comfortable with how people treated me, but I felt less and less like myself. I missed the me that my striking baldness conveyed. Thankfully, my next job was at a smaller company that truly celebrated queer diversity. When rainbow flags appeared on every desk during Pride month, I was sure I was safe. I buzzed it back off, and was met with complete delight at the office the next day. My relief was immediate and overwhelming.

I am a bisexual woman, and while the people I’ve dated have spanned the gender spectrum, many of them have been cis men, and I’m now married to one. Because of this—and even though “B” is always in our acronym—I often feel like I am “not queer enough.” Having a shaved head counteracts this, and makes me feel like I always belong in this community—not for who my partner is, but for who I am. It also makes me feel like I’m expressing my gender and style in a way that is authentic to me. I feel polished. I feel open. I show that I am warm and different and have nothing to hide. I’m back to independent work now, and it’s work that will serve the LGBTQ+ community. I’ve always felt most at home in this community, and I want to show up for it now as my best self—freshly buzzed, wide open, joyful, with big loving eyes, and some damn shiny earrings.