My Younger Self is a Harsh Gatekeeper 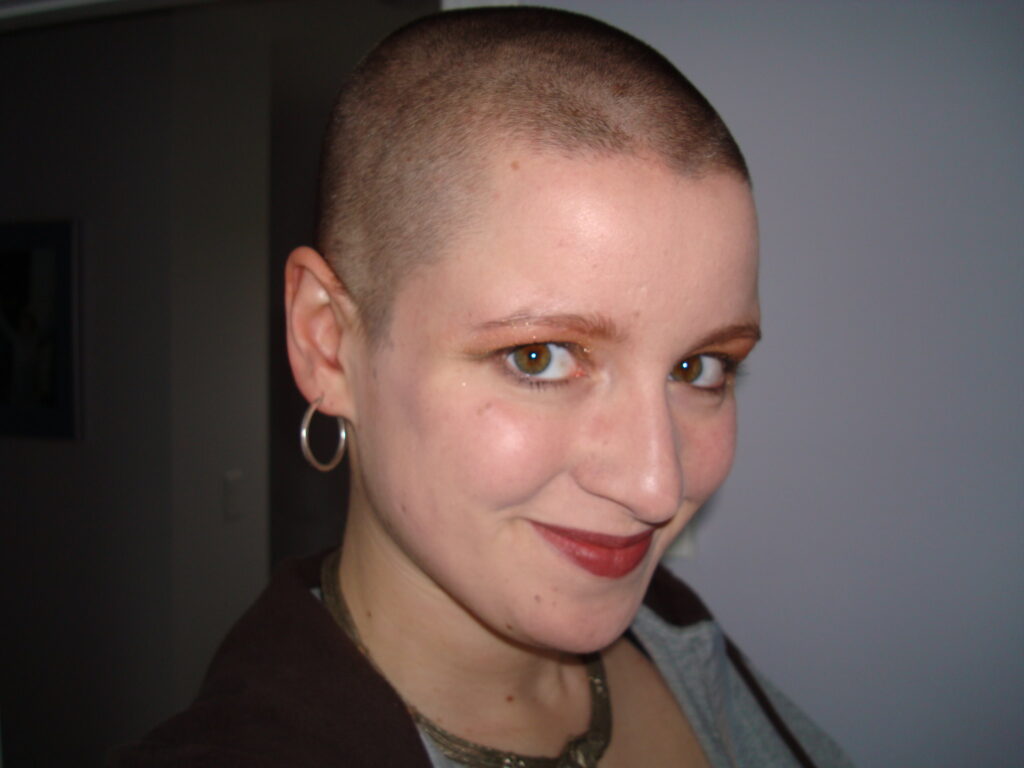 When I decided it was time to update my website and begin writing publicly again, I immediately ran into a gatekeeper: my younger self. The content at the top of my blog was around nine years old, and the summary on my website was similar. I’m now in my late 30s, and I keep running into photos of my 25-year-old baby face every time I click a link. And to be totally honest, she intimidates the hell out of me.

I suppose we have the same haircut, the same skin tone, and the same bone structure. But the eyes are different. Hers are tense and serious. Determined. Wearing playfulness as armor, and ready for battle. She is simultaneously confident and anxious, naive and freefalling, curious and battle scarred. She is full of secrets, and she will not let you in. But she will try to impress you, she will tell you what you’re doing wrong, she will shapeshift in response to how you feel.

She and I vehemently disagree on an important topic: why I left blogging and freelancing 10 years ago. She believes it was a failure and a mistake. She thinks I sold out. Her argument is that I could have done great things, but I bailed when it got hard, so I’m a quitter. She’s certain I’ve now lost my edge—that I got soft, got weak. I am the enemy she had been fighting against. I am her worst fear.

I did feel like a failure when I got my first corporate job. I didn’t want to do it. But we were in a recession, freelance work was drying up, and all of my usual methods for finding gigs had stopped working. I ran out of money, feeling confused and humiliated. It was the only time I had ever asked my parents for a loan to pay rent, and they were hesitant to help because I didn’t have a plan.

Another freelancing friend of mine was in the same situation, but she was sitting on an employment offer, and feeling deeply conflicted about whether she should take it. Someone she trusted said to her, “It’s ok to come in from the rain for a while.” She held onto that message like a lifeline when she said yes.

So I told my parents, “Fine, I’ll try to get a job.” I didn’t blame my parents for the practicality nudge—I knew they were right—but it still felt like making a deal with the devil. I found a great job within two months, and I beat myself up every step of the way.

I worked my way through the brutal self-criticism that came with my shift into corporate work by slowly gaining a broader perspective. I started to learn that the energy sources I thought I thrived on—adrenaline and recognition—were cheap and unsustainable. I saw that I was wearing much heavier armor than necessary and, far from protecting me, it was wearing me out. It became clear that my dedication to independence was not as noble as I believed, and that keeping others out had been limiting my potential, my growth, and my stability. I found deep empathy and affection—along with rational explanations through therapy—for the painful loops I was locked into repeating. I started to love myself.

And that’s when things started to get weird. The scared, angry voice of Younger Sarah was so strong and established that she stayed with me, creating an inner argument about what I was doing with my life. She had no interest in considering new evidence; she just railed on and on about how I’ve abandoned my dreams. But as I started achieving new goals—like getting out of debt, finding stable partnership, and becoming a manager—it became easier to compartmentalize her screaming and turn the volume down on it. She didn’t design my new life, so I knew she wouldn’t get it. The only opinion that mattered going forward was my own, in the present.

But now… now I’m suddenly back on her turf, and she is not letting me in without a fight. The websites, blogs, and social media accounts under my name—they were her whole world. She built all of this, and is fierce in her protection of it. No one could ever tell her how to run things, and I am no exception.

The first thing I tried to do was update the design of the long-standing blog at SarahDopp.com and add a new blog post. I tried to extend my old writings into today, add new context, and update some elements to make it work. It felt like I was erasing her spirit and demanding that she change. She flailed and screamed at me accordingly.

So we’re compromising. She’s letting me update the website’s homepage because we agree it should be current, but we also agreed I should start a whole new blog. Her blog is still intact, but I’ve changed the heading and sidebar to make it clear that it’s for archive purposes only. She’s a little annoyed with me about that, but she conceded as a way of showing me some kindness (something she would never have done for herself).

I can feel her starting to lighten up. Underneath all her punishment, I know she’s glad that I came back. I think she sees that I can still do the work she wanted, that I have more tools and skills for it now, and I might even be able to go further with it. She has a few requests for my plans: please keep writing, please stay unique, and please don’t put income before integrity. Those seem reasonable to me. I promise to do my best.